The Amarillo Astronomy Club (based in Amarillo, Texas) was founded in 1981 and currently has about 35 members. Membership is open to anyone age 16 or older with a genuine interest in astronomy. Most club members own telescopes or binoculars, but ownership is not necessary to be in the club. A one-year membership is $15 per family. Members receive a monthly club newsletter and the quarterly newsletter of the Astronomical League (Reflector). The club meets once a month, usually at the Don Harrington Discovery Center, from September through May. Meetings are held on the Friday closest to the full moon and begin at 7:30 PM. The first part of the meeting is normally a program pertaining to astronomy. Some programs are presented by club members and some are presented by guests. The second half is a business meeting. After the meeting, the club goes to a local restaurant for an informal social gathering. During June, July, and August, the club meets at the restaurant once a month at 7:30 PM for a social only. Other activities include an annual Christmas party and a picnic at Buffalo Lake in August. The club has an observing site on private property about 17 miles south of Claude, TX. At least one observing session a month is scheduled at this site. If the weather permits, additional sessions are often held. Some members attend star parties during the year such as the Okie-Tex, Nebraska, and Texas Star Parties. The club also goes to Caprock Canyons and Clayton Lake once a year for observing sessions. The club also supports the Discovery Center’s Astronomy Day activities each year during late April or early May. The club’s other activities have included the design, building, and modification of telescopes. There have also been classes on mirror grinding.

How To Join The AAC

It’s easy, just go to any of the meetings and say hello, watch what goes on, talk to the members and join if you like what you see.

No charge to go to any meetings. Annual family dues are only $15.00.

Meetings are held at 7:30 pm downtown in the Amarillo National Bank Bldg., 16th floor conference room, on the Friday closest to the full moon (click the calendar on this website).

During the summer they are held more informally at the Pizza Planet on Paramount Blvd. (also see calendar for summer dates)

Coordinated Photographs of the Moon

With all the public hype about the November 2016 super moon, I thought it might be interesting (novel) to take simultaneous photos of this particular lunar event with my friend in South Australia. This certainly would not be cutting edge science by any stretch of the imagination but, if successful, the outcome may be of some interest. It would be a learning experience requiring me to venture into new space relative to camera application.

The first step was to determine the window of opportunity for both Briani (the Aussie component) and me. My goal was to open our respective camera lens at the exact same instant in time. To do this I relied upon a USNOii website that provides moon azimuth and elevation for any location worldwide. Knowing Brian’s longitude and latitude I had this website generate the time history, relative to UTC, for the moon. I repeated this exercise for my location. Then comparing the two tables, I was able to establish the time, within +/- a minute of shutter action. In terms of local time, this was 5:15 a.m. Nov. 14th in Amarillo. Brian’s shutter time was 9:45 p.m. Nov 14th. This placed the moon about 22.5 degrees above our respective theoretical horizons; my moon was setting and his moon was rising. (This time was refined from the tabular data by plotting both elevations as a function of UTC. Then by noting the point of intersection of the two lines the critical shuttle release time was established. Conversion to local times for both of us is straight forward. UTC time was 11:15 November 14, 2016.)

Next challenge was to determine suitable camera settings. This was no problem for Brian as he has excellent command of photograph as well as composition. I did several internet searches for suggestions on how to photograph a full moon. The more interesting solution, and the one I relied on, is the “Loony 11” rule. This is a corollary of the “Sunny 16” rule from the days of film camera. The translation of the Loony 11 rule into camera setting is: shutter speed set to 1/100 sec., aperture set to f11 and ISO to 100. Simple enough! During the shoot, I varied these settings to bracket the best photo.

On the nights of Nov 12th and early morning of the 13th I took a multitude of photos in order to confirm camera control settings and where I was going to physically locate the camera being that several neighbors have night lights. By doing the detail work ahead of time I was able to take the stress and uncertainty out of the problem. By the time of the critical shot, I had all of the details firmly resolved with satisfactory solutions.

Brian did the final work of combining both photographs into a comparative presentation. The end result is what one would expect. That makes it somewhat anticlimactic. But the path to the solution was interesting and fun to work out. We thought that weather on his side would not cooperate. But even that challenge faded away at the critical time. The main challenge and one that I could not overcome was the compression of the photo pixel content imposed by Gmail and Yahoo. These e-mail systems strip down the size of photo attachments prior to transmitting the e-mail. This effect reduced the resolution of the photographs. 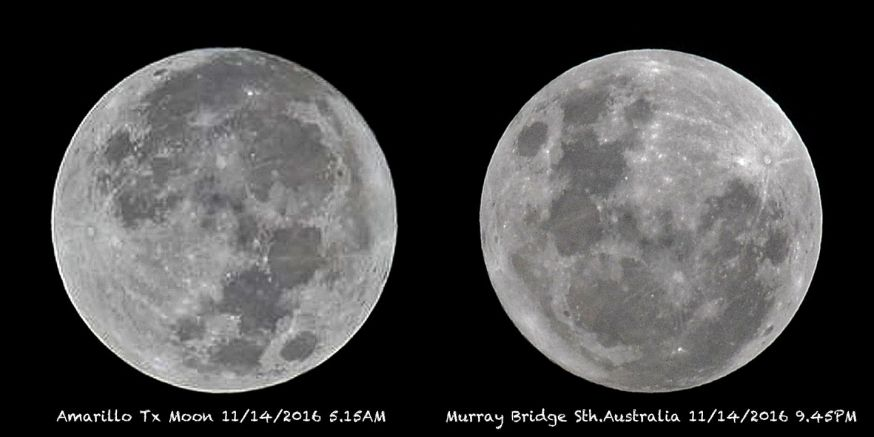 These are a few of the photos that our members have taken of the May transit of Mercury.

From a simple IPhone snapshot through a white light filter to a high end H-Alpha shot of Old Sol in all its convoluted splendor. 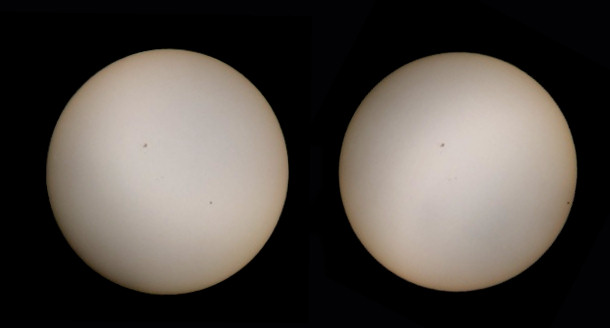 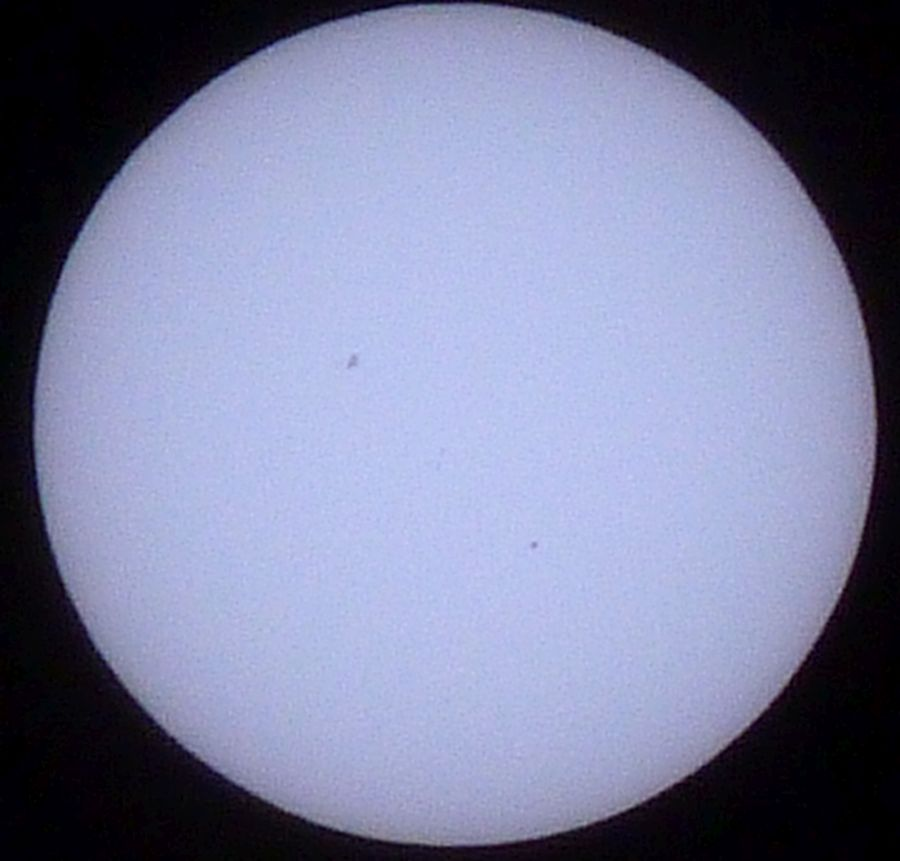 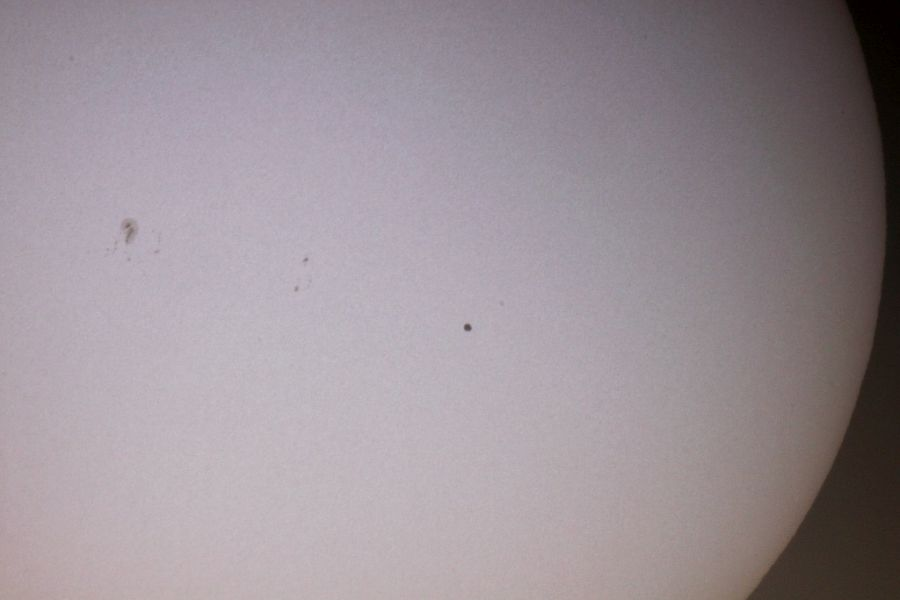 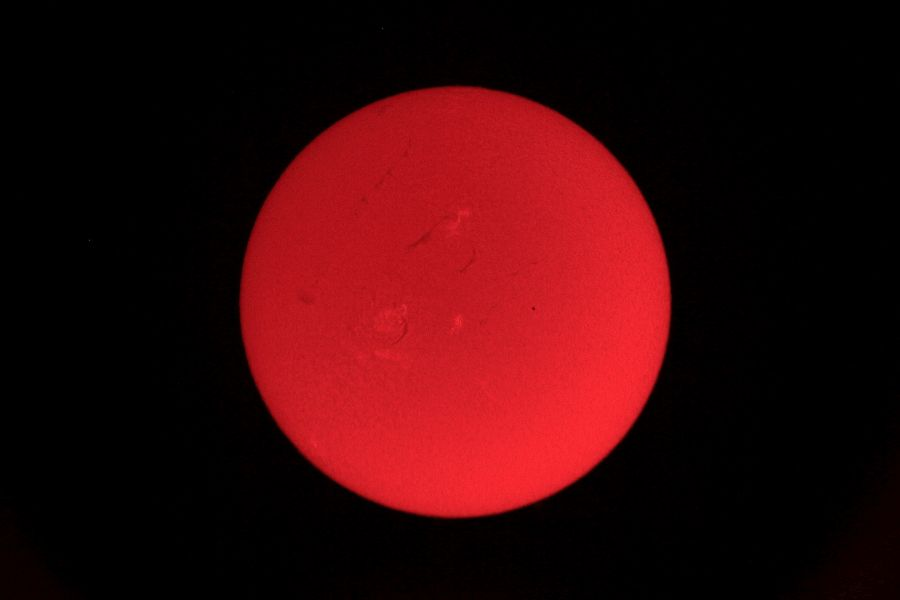 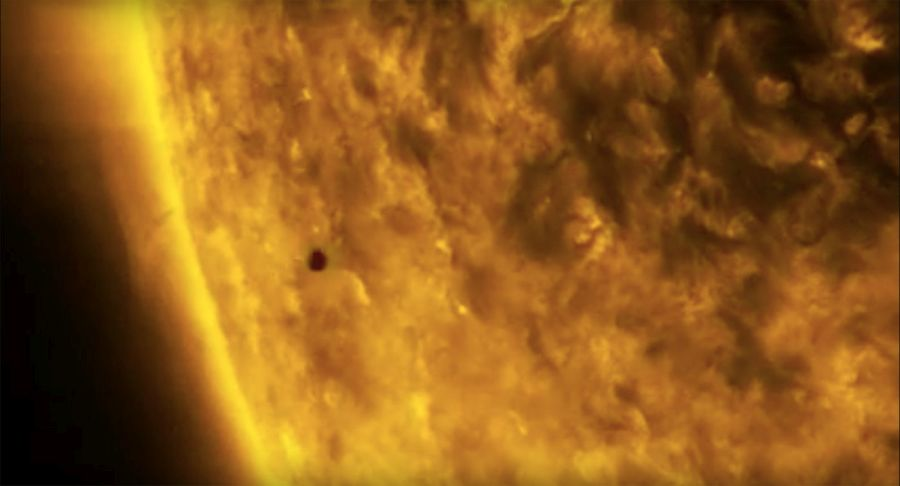 Jim Chase created this super slideshow/video of Okie-Tex 2015, including a dusk till dawn fisheye view of the sky. It runs through Vimeo which can sometimes stop mid stream. If it does, just click ahead in the timeline a few seconds and it will usually continue. Also running it a second time can clear the problem.

My camera was a Nikon D90, tripod mounted with a Rokkor 10.5mm “fisheye” lens; frame exposures 25 seconds each with a 5 second delay to the next exposure; ISO=3200. I used the *.jpg setting on the camera (as opposed to *.raw) so the files wouldn’t be too big. I used a freeware program called, “DCamCapture” on my laptop PC to control the camera and collect the exposures to the hard drive. The camera ran all night long - sundown to sunup - and took appx 1300 exposures. I used PhotoShop Lightroom to post-process the exposures and spruce them up a little. And then I used Photodex ProShow Producer to splice them together and create the show.

Just click on the picture below to go to Jim’s video. 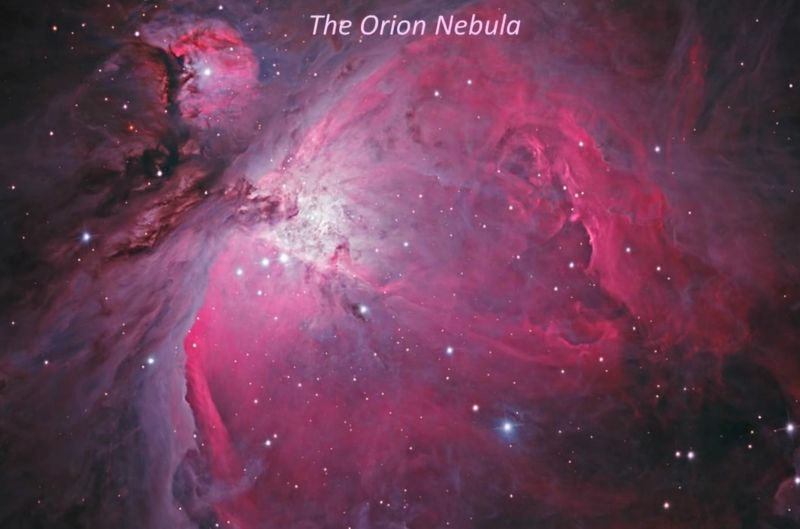 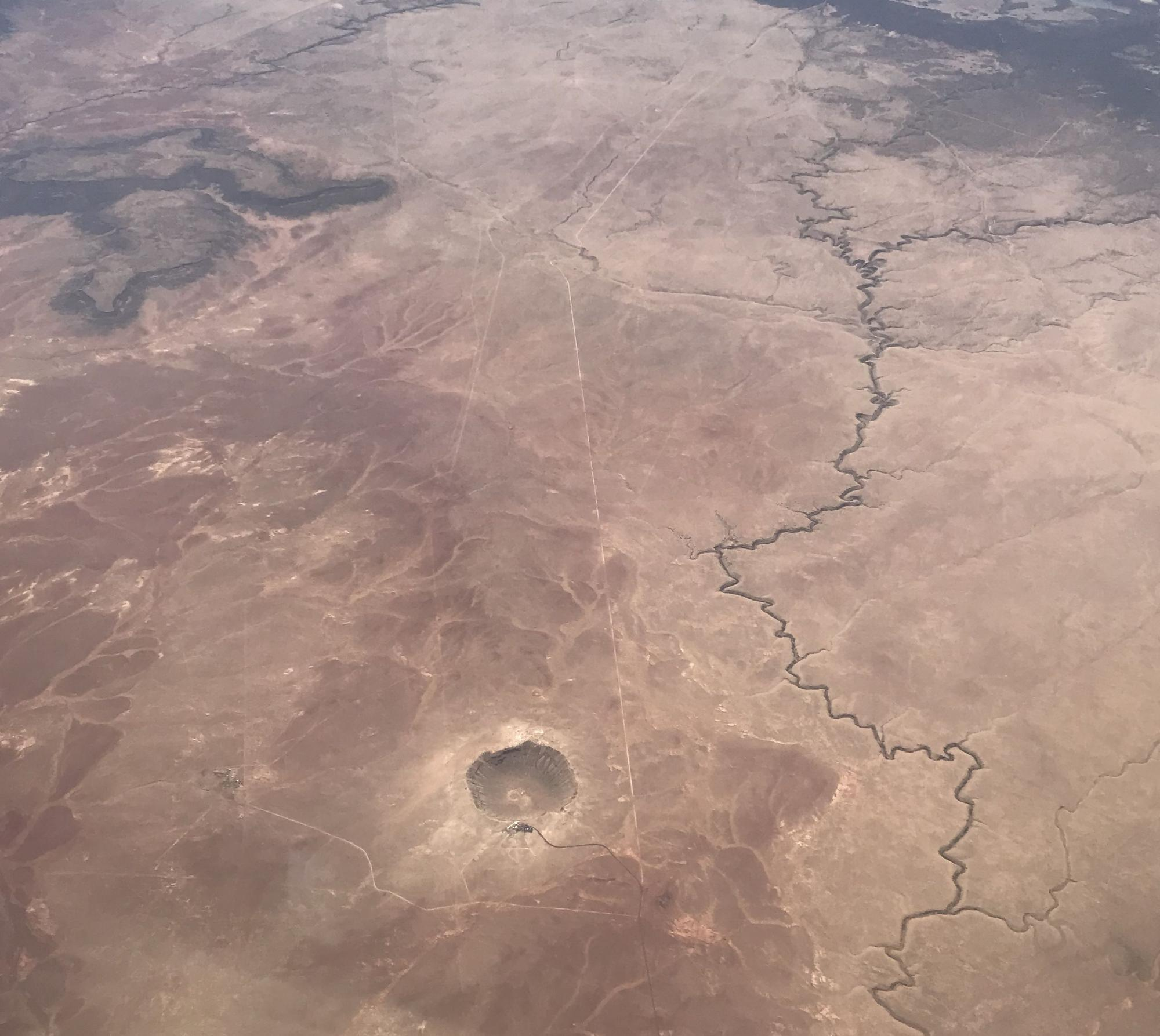 The above picture shows the 50,000 year old crater and surrounding area near Winslow AZ. It is about a mile wide and has survived because of the very arid climate in that part of Arizona. 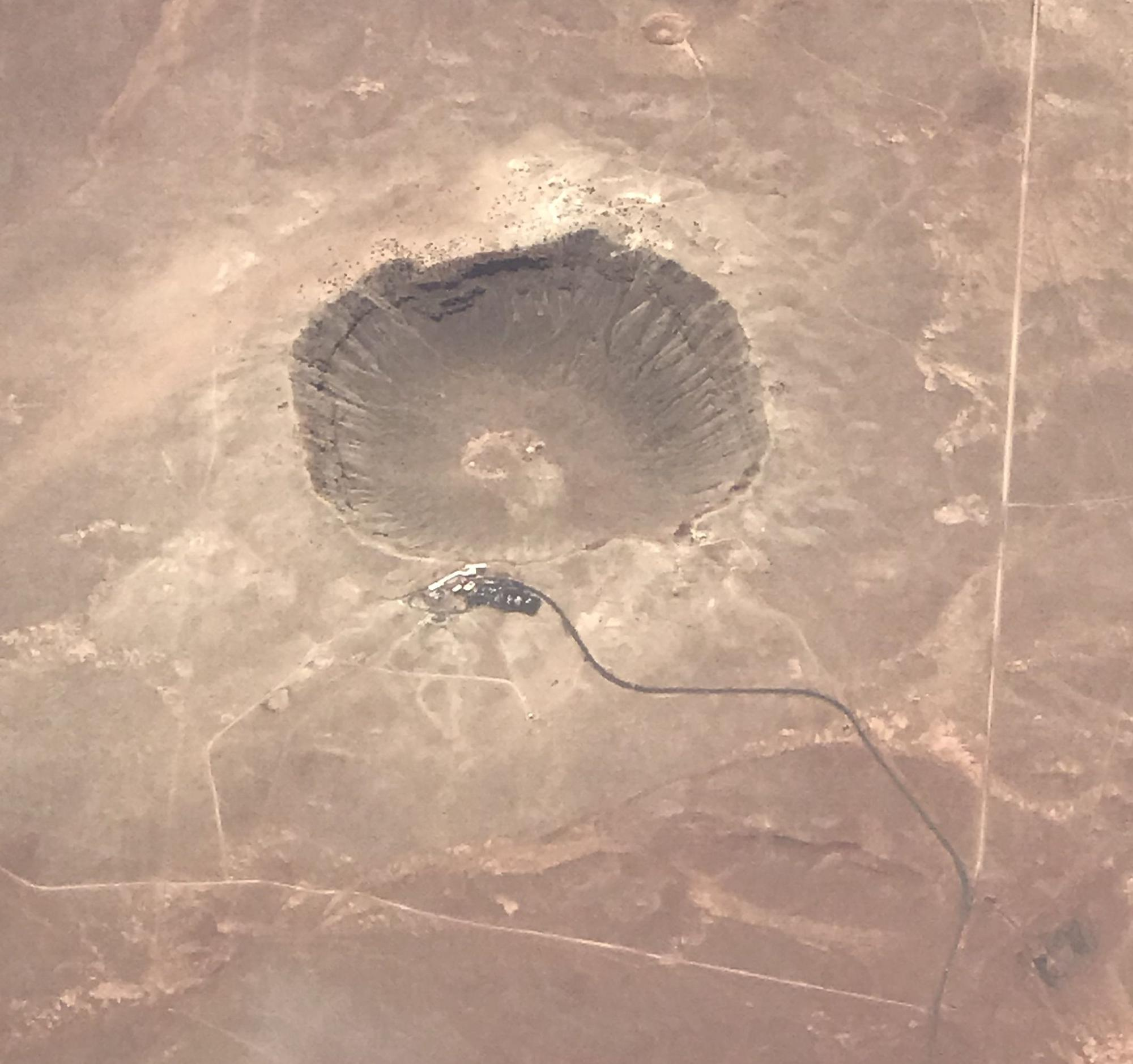